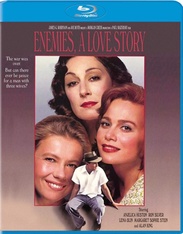 Holocaust survivor, Herman Broder (Ron Silver), is living in New York City and wrestling with post-war depression. Herman is married to Yadwiga (Margaret Sophie Stein) but also having an affair with Masha (Lena Olin), a married woman. To complicate matters further, Tamara (Anjelica Huston), his first wife who was believed to be killed in a concentration camp, resurfaces in America. "Enemies, A Love Story" is a portrait of life, love, and loss among a man and three women in his life.