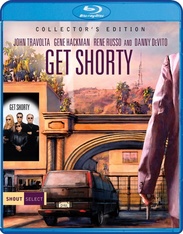 John Travolta plays Chili Palmer, a Miami loanshark who's sent to Los Angeles to collect on a gambling debt from film producer Harry Zimm. Chili is an avid movie fan and instead of breaking Harry's legs, he pitches him an idea that could be the next break of Harry's career.