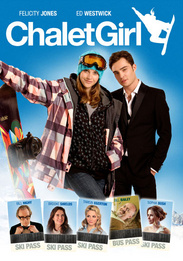 Pretty tomboy Kim (Felicity Jones) used to be a champion skateboarder, but now she flips burgers to support herself and her dad. Opportunity comes knocking when she flukes a winter-long catering job in one of the plushest ski chalets in the Alps. At first, Kim is baffled by this bizarre new world of posh people, vintage champagne, epic mountains and waist deep powder. Then Kim discovers snowboarding, and her natural talent soon sees her training for the end-of-season competition, with a chance to win major prize money. But before she can become a champion again, Kim needs to overcome her deepest fears  and figure out whats going on with Jonny (Ed Westwick), her boss handsome but apparently unavailable son.

Rated R for some language.