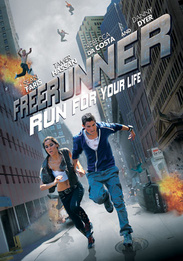 FREERUNNER captures all the unstoppable force of urban acrobatic freerunning (also known as Parkour) in this relentless pulse-pounding thriller that leaves "fast" and "furious" in the dust! Sean Faris (Never Back Down) stars as Ryan, a freerunner who will do whatever it takes to break free from Reese (Tamer Hassan, Kick-Ass), a mobster who controls a band of street racers. They run for the rush and for the money, but now they are running for their lives in the ultimate death race. With exploding collars locked around their necks, they have just one hour to make it across town all for the amusement of Mr. Frank (Danny Dyer) and a betting organization with stakes on who will live and who will die. First place gets $1 million. There is no second place and time is running out for Ryan to save himself and rescue his kidnapped girlfriend. World Champion Freerunner Ryan Doyle costars with Seymour Cassel (Artie Lang's Beer League) in this non-stop thriller with explosive action and mind-blowing stunts!

Rated R for some bloody violence, language and sexuality/nudity.