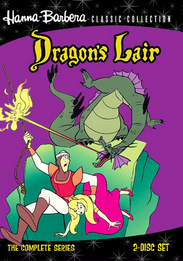 The legendary videogame Dragon's Lair was a blockbuster (and quarter guzzling) sensation when it first debuted, spawning sequels, imitators, and a beloved Saturday morning cartoon series. Developed by the powerhouse animation crew put together by Joe Ruby and Ken Spears, the Dragon's Lair cartoon made many contributions to the Dragon's Lair saga, from naming the Dragon "Singe" to rounding out the cast with such memorable supporting players as Bertram the horse (voiced by animation legend Peter Cullen) and Timothy the squire (voiced by Michael Mish). Mimicking the action of a videogame, Dragon's Lair pauses the action and asks the audience which action Dirk should take next in his never-ending quest to protect the kingdom of King Ethelred and his beloved Princess Daphne. But enough talk! Dirk the Daring faces doom throughout this 13 episode, 2-disc set and he needs YOU to help him decide what to do next!