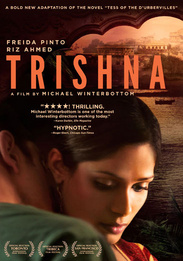 Based on Thomas Hardy's classic novel Tess of the D'Ubervilles, master filmmaker Michael Winterbottom's newest film stars Freida Pinto who soars as Trishna in her most revealing performance yet. Trishna lives with her family in a village in Rajasthan, India's largest state. As the eldest daughter, she works in a nearby resort to help pay the bills. Jay (Riz Ahmed, FOUR LIONS) is the wealthy son of a property developer. When he takes up managing a resort at his father's request, he meets Trishna at a dance and their fates cross. Jay finds every opportunity to win Trishna's affection and she accepts his efforts with shy curiosity. But when the two move to Mumbai and become a couple, Jay's deep family bond threatens the young lovers' bliss. Shot with Winterbottom's agile camera, TRISHNA is a powerful look at the tension between ancient privilege and modern equality, between codes of urban and rural life and ultimately a hymn to both the glory and the tragedy that comes with beauty in all forms.

Rated R for sexuality, some violence, drug use and language.