Civilization: The West and the Rest with Niall Ferguson 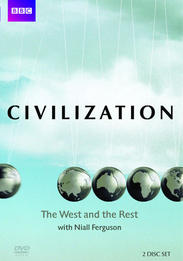 The West once ruled more than half the world. The religion it exported, Christianity, is still followed by a third of mankind. Above all, the way people live - or aspire to live - is unmistakably an invention of the West. All over the world, more and more humans eat a Western diet, wear Western clothes and live in Western housing. But are we living through the beginning of the end of the West's ascendancy? In this remarkable series, Niall Ferguson explains how by juxtaposing the West and the Rest', we can uncover the keys - the six killer applications - of Western ascendancy: the real explanation of how, for roughly five centuries, a clear minority of mankind managed to secure the lion's share of the EarthÂ´s resources.