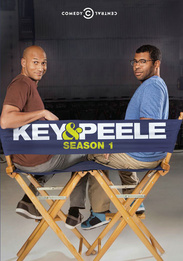 Want to meet Luther, President Obamas anger translator? Or hang by the punch bowl with Bar Mitzvah sensations Dr. Dreidel & Gefilte Fresh? Whether it's satirizing the President, spoofing Nazis, or ordering up some soul food, Key & Peele arent afraid to take on taboo subjects for the sake of comedy. These guys are daring and outrageous and it shows in this critically acclaimed first season. Dont miss Key & Peele Season One on DVD and Blu-ray.