Baby Geniuses and the Mystery of the Crown Jewels 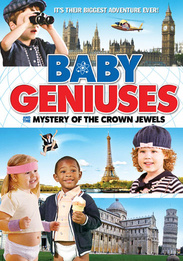 Beneath the Bobbins Day Care Center in Washington DC lies the headquarters of the Baby Squad Investigators: a top-secret international network of babies who solve crimes using high-tech Vortex technology. When Big Baby, the ultimate super-villain, threatens to take over the world (or the universe!), itâs up to the BSI team to put a stop to their evil plans. And with Moriarty (Jon Voight) appearing at every turn, bigger questions begin to surface. Whether itâs saving the Crown Jewels in London, pizza in Pisa, or paintings in Paris, Skip, Alfred, Gabi and Jordan have what it takes. Thereâs only one top-secret spy agency that can save the world- and theyâre Baby Geniuses.