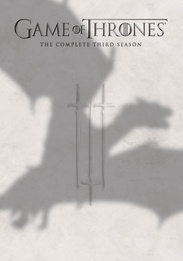 In the third season of the hit HBO® drama series Game of Thrones, the Lannisters barely hold on to the throne, while stirrings in the north threaten to alter the overall balance of power. Robb Stark faces calamity in his efforts to build on his victories while beyond the Wall, Mance Rayder and his army of wildlings continue their march south. Across the Narrow Sea, Daenerys Targaryen attempts to raise an army in hopes of eventually claiming the Iron Throne. In season three of this original series, the battling families of Westeros continue to clash as bonds are strained, loyalties are tested, and cruel fates are met.