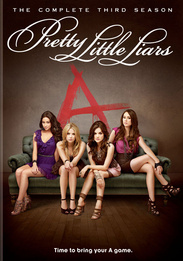 A long summer vacation is just what Aria, Emily, Hanna and Spencer needed to heal from the traumatic year that included Maya's murder and learning Mona was "A." But as school and the second anniversary of Alison's death approaches, what begins as an attempt to leave the past behind ends with a shocking new nightmare. With the unearthing of family secrets and shifting alliances among the girls' intimate relationships, sinister new mysteries unfold... mysteries that the girls are desperate to solve in order to clear their names... and to stay alive.