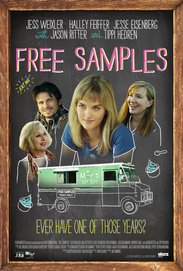 In this offbeat indie comedy that premiered at the Tribeca Film Festival, Stanford Law School dropout Jillian (Jess Weixler of TEETH) is hung-over - really hung-over - and now finds herself trapped in food-truck hell, doling out free samples of ice cream topped with extra attitude. Over the course of one crazy day, she encounters a cast of oddball characters, including a retired movie star (Tippi Hedren of THE BIRDS), last night's drunken hook-up (Jesse Eisenberg of SOCIAL NETWORK), a friend who dreams of serving ice cream pants-less (Jason Ritter of TV's PARENTHOOD), and, of course, her ex-fiancÃ©. Will this day spent in a Los Angeles food truck wake Jillian from her aimless daze and make her realize that life doesn't stop just because you want it to? Also starring: Halley Feiffer (TV's BORED TO DEATH, THE SQUID AND THE WHALE).