Girl on the Run 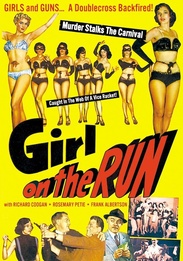 Janet is on the run from the law ? sought in the murder of a District Attorney. She finds refuge in a two-bit traveling carnival, where the shapely young woman is hired as a strip tease dancer. The desperate girl meets Blake, a dwarf who rules the circus with an iron fist and presides over a secret underworld of vice and murder.

Produced by Astor pictures, Girl on the Run is a sexy, forgotten film noir which features plenty of scantily clad strippers and a Fellini-esque cast of strange characters, most notably Charles Bollender as the little person who is the undisputed boss of the carnival. This movie also contains a Hollywood first. At around 4:20 into the feature, future screen legend Steve McQueen can be seen in the background at the carnival, taking a whack at the hammer game, in what is said to be his first screen appearance.