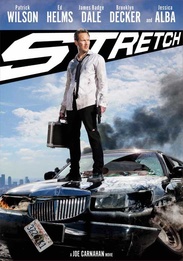 The director of Smokin' Aces brings you into the world of Kevin Stretch, a Hollywood limo driver with a dark past. When Stretch is in need of quick cash to pay back his debts to a notorious gangster, he takes a job with a billionaire client in hopes of a big payday. His client's eccentricities soon escalate into a wild night of adventure, sex, and danger which begins to make the fate of returning to the mob empty-handed seem reasonable.

Rated R for language, sexual content/nudity, some drug use and brief violence.