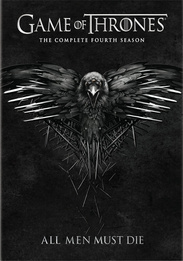 In this thrilling fourth season based on George R.R. Martins bestselling books, the Lannisters control over the Iron Throne remains intact, but can they survive their own egos as well as the ongoing threats around them? While an unshaken Stannis Baratheon continues to rebuild his army on Dragonstone, a more immediate danger comes from the south, as Oberyn Martell, the Lannister-loathing Red Viper of Dorne, arrives at Kings Landing to attend Joffreys wedding. At the Wall, the Nights Watch seems overmatched against Mance Rayders advancing army of wildlings, which in turn is being trailed by an even more formidable foe. Whats more, Daenerys Targaryen, accompanied by her fierce trio of dragons and an Unsullied army, is poised to liberate Meereen, the largest Slaver City in the east, which could provide her with an imposing force to execute her ultimate plan of reclaiming the Iron Throne for her family.