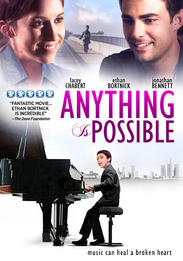 INTERNATIONALLY RENOWNED PIANO SENSATION ETHAN BORTNICK makes his film debut in Anything Is Possible, an uplifting story of hope and family, featuring inspiring songs written and performed by the young musical star. Ten-year-old Nathan (Bortnick) is devastated when his mom is reported missing while serving on an overseas Army rescue mission. Feeling scared and alone, Nathan runs away from home only to find shelter from the city streets at a local orphanage. There, Nathan's incredible talent at the piano is discovered, and he becomes the star attraction at a benefit concert to raise money for the orphanage. Inspired by the kindness of the people he met on his journey, Nathan holds on to the belief that his mom will come home and his family will be reunited. This heartwarming story proves that with love, compassion, selflessness and hope, anything is possible.