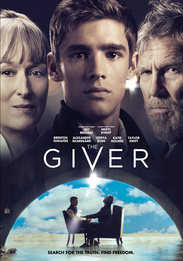 The haunting story of THE GIVER centers on Jonas, who lives in a seemingly ideal, if colorless, world of conformity and contentment. Not until he is given his life assignment as the Receiver of Memory does he begin to understand the dark, complex secrets behind his fragile community. The film is based on Lois Lowry's beloved young adult novel of the same name, which was the winner the 1994 Newbury Medal and has sold over 10 million copies worldwide.

Rated PG-13 for a mature thematic image and some sci-fi action/violence.