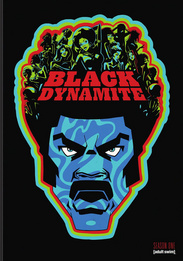 Based on 2009's critically-acclaimed feature film, the Black Dynamite animated series further chronicles the exploits of the central character, Black Dynamite, and his crew. Black Dynamite is a 1970s renaissance man with a kung-fu grip. A lover and a fighter who is not afraid to leap before he looks. His sidekick extraordinaire is Bullhorn, the brains and cunning that complements Black Dynamite's hard-hittin', bone-crushin' style. Providing comic relief on the mean streets is Cream Corn and classing up the place is the gorgeous Honey Bee.