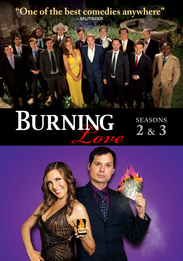 Own Seasons 2 & 3 of Burning Love, the hilarious, Emmy-nominated series, now on DVD. Season 2 Spurned Dental Hygienist, Julie Gristlewhite, returns to the Burning Love Mansion, where she tried and failed to win Mark Orlando's heart. She's hoping to meet her future husband in a group of eligible bachelors that includes: a Single Dad, a Prince, a Party Guy and a Jew. Season 3 Your favorite rejects return to the mansion in the hopes of winning a staggering prize, $900. Will there be hookups? Backstabbing? Romance? Candles? Champagne? Outfits? Yes to all.