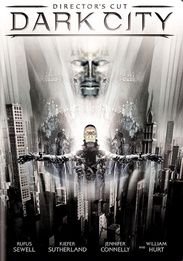 When John Murdoch (Sewell) awakens in a strange hotel room, he finds that he is wanted for a series of brutal murders. The problem is he can't remember a thing. Pursued by the police and haunted by the Strangers, mysterious beings who possess the ability to stop time and alter reality, he seeks to unravel the twisted riddle of his identity. But in a city where reality is the ultimate illusion, discovering the truth could be fatal.

Rated R for violent images and some sexuality.