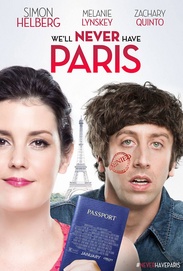 In a story based on true events, Quinn (Simon Helberg) has been in a devoted relationship with Devon (Melanie Lynskey) for several years, and is ready to propose marriage until a gorgeous blonde co-worker reveals her love for him. Quinn immediately has second thoughts about matrimony and ends up terminating his relationship with his long-time better half. After a brief relationship with the blonde, Quinn quickly realizes hes made the mistake of a lifetime, so he sets off to Paris, where his one and only true love has moved, to win her back.