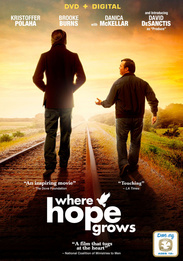 WHERE HOPE GROWS is a wonderful feature film that is breaking new ground by casting a young man with Down syndrome, David DeSanctis, in a lead role.

David is an inspiration in his own right. He lights up the room with his charismatic, funny and smart personality. At 22 years-old, he is a Louisville native who has a passion for motivating others. When cast in the filmâs starring role, the director (Chris Dowling) asked David if he could read; David licked his finger to turn the first page of the script and speedily memorized 130 lines. An ardent music lover, David used his own self-curated music playlists to help memorize scenes, as well as for dance breaks to help unwind. He can also cite thousands of song titles, lyrics and artists off the top of his head.

WHERE HOPE GROWS is a story of adversity and triumph that follows professional baseball player Calvin Campbell, who was sent to an early retirement due to panic attacks at the plate. Even though he had all the talent for the big leagues, he struggles with the curveballs life has thrown him.

Rated PG-13 for thematic issues involving drinking and teen sexuality, and for brief language and an accident scene.