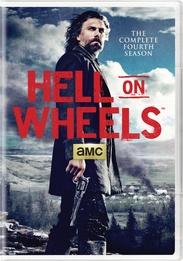 Season Three of HELL ON WHEELS ended with Cullen married to a pregnant Naomi and living in a Mormon fort where the Swede (Christopher Heyerdahl) was impersonating church leader, Bishop Dutson; Thomas "Doc" Durant (Colm Meaney) back in control of the Union Pacific Railroad which had successfully expanded westward to Cheyenne; and Elam (Common), gravely injured by a bear while searching for the missing Cullen.