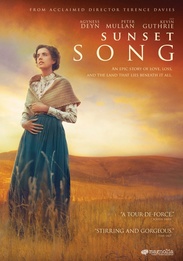 A young womanâs endurance against the hardships of rural Scottish life, based on the novel by Lewis Grassic Gibbon, and told with gritty poetic realism by Britainâs greatest living auteur. The film takes place during the early years of the twentieth century, with the conflicts and choices a young woman experiences reflecting the struggle between tradition and change - a struggle that continues to resonate today. Set in a rural community, SUNSET SONG is driven by the young heroine Chris (Agyness Deyn, Clash of the Titans) and her intense passion for life, for the unsettling Ewan (Kevin Guthrie, Fantastic Beasts and Where to Find Them) and for the unforgiving land. The First World War reaches out from afar, bringing the modern world to bear on the community in the harshest possible way, yet in a final moment of grace, Chris endures, now a woman of remarkable strength who is able to draw from the ancient land in looking to the future. SUNSET SONG is at once epic in emotional scale and deeply romantic at its core, given power by Daviesâ unflinching poetic realism.

Rated R for sexuality, nudity and some violence.