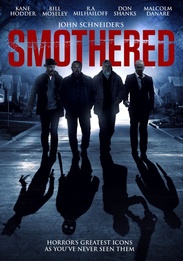 Smothered boasts the largest collection of horror icons on one screen ever and its great to see them together. When a bunch of horror icons are at a crappy horror convention, they get offered a bunch of money to scare a bunch of fans at the local park. Easy money for a weekend gig, right? Wrong. When they get there, they meet the woman who runs it, as well as her incredibly well-endowed daughter, Dee Dee, but little do they know that they are not just the stars of the weekend, but the intended victims! Watch as your favorite horror icons fight for their lives...