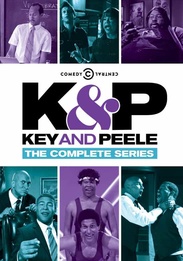 Key & Peele showcases the fearless wit of Keegan-Michael Key and Jordan Peele as they take on everything from "Gremlins 2" to systemic racism. With an array of sketches that are wide-reaching and cringingly accurate, the pair has created many classic characters, including Wendell, the players of the East/West Bowl and President Obama's Anger Translator.