The Night Of: The Complete First Season 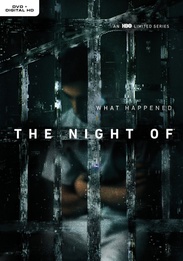 "A probing contemporary look at crime, the presumption of guilt and the urban prison system, The Night Of delves into the intricacies of a complex New York City murder case with compelling cultural and political overtones. Played out over the course of eight riveting hours, The Night Of offers viewers an invigorating new take on the crime-drama genre, exploring the vagaries of a single murder case through multiple, contentious points of view. Starring John Turturro as an embattled defense attorney and Riz Ahmed as his young Pakistani-American client, the story centers around the brutal murder of a young woman on Manhattan's Upper West Side, examining the initial police investigation, arrest, and imprisonment of the prime suspect  a likeable, unassuming college student who finds himself and his family thrown into the pit of NYC's criminal, legal, penal and judicial system. Meanwhile, his lawyer, an inveterate ""precinct trawler"" who lucks into the biggest case of his life, becomes entangled in a web of complicated legal maneuverings by detectives and rival attorneys that undermine his ability to try the case. Written by Steven Zaillian (Oscar®-winning writer of Schindler's List) and Richard Price (The Wire, Oscar®-nominated for the adapted screenplay of The Color of Money), The Night Of takes an unvarnished look at both the multifaceted NYC criminal-justice system and the feral purgatory of Rikers Island, where the accused await trial for felony crimes. "