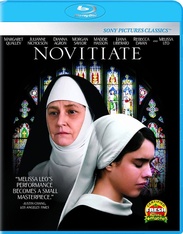 Spanning over a decade from the early 1950s through to the mid-60s, NOVITIATE is about a young girl's first initiation with love, in this case with God. Raised by a non-religious, single mother in rural Tennessee, a scholarship to Catholic school soon finds Cathleen drawn into the mystery and romanticism of a life devoted to the worship and servitude of God.

Rated R for language, some sexuality and nudity.