The Biskitts: The Complete Series 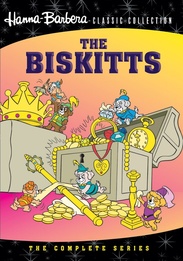 Hidden deep in the swamp lies tiny Biskitt Castle, home of the smallest dogs in the world, the Biskitts! For years, kings have entrusted their royal treasure to these pups. Now, from a nearby castle, rules the wasteful King Max and so begins every fantasy and fun-filled episode of the little-seen bit of animated family magic from the maestros at Hanna-Barbera. Effectively bridging the gap between two eras of the storied studio's output, The Biskitts blends the kid-friendly vibe of shows like Monchhichis and Snorks with the funny adventure found in shows like Wacky Races and Jabberjaw. The Merry Men-like band of miniature medieval mutts guards the treasures of Biskitt Castle from the likes of evil King Max (Kenneth Mars); Max's jester, Shecky (Kip King) and Max's Dogs Fang and Snarl (Mars and Peter Cullen), while trying to avoid getting eaten by The Moat Monster (Frank Welker) or the wildcat Scratch (Cullen).