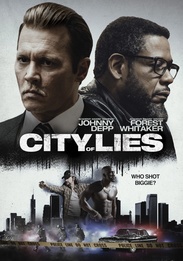 What is worse, the crime or the cover-up? Based on the book, LABYRINTH, by Pulitzer Prize-winning author Randall Sullivan, this compelling crime-thriller follows the investigation into the infamous murder of iconic rap artist Christopher Wallace aka The Notorious B.I.G. Oscar nominee Johnny Depp stars as determined LAPD detective Russell Poole, who spent nearly 20 years trying to solve the murder, and Oscar and Primetime Emmy winner Forest Whitaker as Jack Jackson, a journalist who teams up with Poole in search of the elusive truth. Together they explore why the case remains old - and why a secretive division of the LAPD is seemingly set on keeping it that way.

Rated R for language throughout, some violence and drug use.