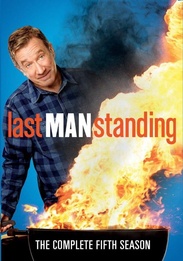 Tim Allen returns for a fifth hilarious season of Last Man Standing as politically outspoken sporting goods marketing man Mike Baxter. As his daughters mature, Mike faces the fact that other men will enter the family, for better or for worse. And while Mike rants about what he considers an endangered species -- men -- his lovely wife Vanessa (Nancy Travis) keeps the peace in the Baxter household!