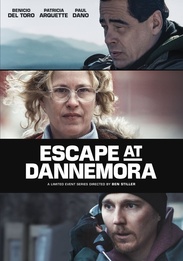 Benicio Del Toro, Patricia Arquette, Paul Dano and Bonnie Hunt star in ESCAPE AT DANNEMORA, a SHOWTIME Limited Event Series directed and executive produced by Ben Stiller. Based on the stranger-than-fiction prison break in upstate New York, ESCAPE AT DANNEMORA follows the story of two convicts who spawned a statewide manhunt and were aided in their escape by a married female prison employee who became involved with both men. Its a bizarre tale filled with twists and turns, yet through it all theres one thing that unites the inmates and citizens of Dannemora  everyones looking for a way out.