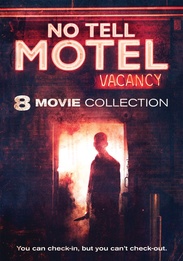 Hostel
Presented by Quentin Tarantino (Kill Bill, Vol. 1 & 2) and directed by Eli Roth (Cabin Fever), Hostel is a shocking and relentless film in the tradition of Saw about two American backpackers (Jay Hernandez, Friday Night Lights and Derek Richardson, Dumb and Dumberer) in Europe who find themselves lured in as victims of a murder-for-profit business.

Identity
Ten strangers with secrets are brought together in a savage rainstorm at a desolate motel. Relief in finding shelter is quickly replaced with fear as the ten travelers begin to die, one by one. They soon realize that, if they are to survive, they'll have to uncover the secret that has brought them all together.

Vacancy
When a couples car breaks down in the middle of nowhere, they are forced to spend the night at the only motel around, with only the TV to entertain them - until they discover that the low-budget slasher videos they find in their room were all filmed in the very room in which they're sitting. With hidden cameras now aimed at them - trapping them in rooms, crawlspaces, underground tunnels - and filming their every move, the couple must struggle to get out alive before they end up the next victims on tape.

Terror at Red Wolf Inn
A college student returns to her dorm room after class and discovers she is the winner of an all-expense paid vacation to the Red Wolf Inn. Before she can share her good fortune with her parents, she and two other girls are whisked away to begin their vacation of a lifetime. When one of the guests suddenly disappears, the young woman doesnt believe the explanation the old couple who run the inn gives her concerning the strange goings on at the Red Wolf.

It Happened at Nightmare Inn
Two spinster sisters run a small inn that caters towards young foreign female tourists. Unfortunately, there is a dark side to the sisters that rises up to punish the young women they deem immoral. Many a traveler comes to stay but never end up leaving the inn. When the sister of one patron comes in search of her missing sibling, it threatens to expose the truth behind the inn and its owners.

Devils Nightmare, The
A busload of tourists is forced to take refuge at a castle due to a blocked road and inclement weather. The Baron and staff of the castle welcome the visitors but do not reveal to them the curse over the household. It seems that Satan has control over the estate and demands the new visitors be sacrificed to him in the form of the Seven Deadly Sins.

Legacy of Blood
An aged millionaire passes on and leaves his four children his large fortune. According to his will, the four heirs must spend one week at his estate in order to split up the fortune. If any of the heirs leave or die before the week is out, the remaining children will receive the money and if all the heirs are gone, the servants will gain the inheritance. Once everyone has arrived at the estate and settled in, strange things begin to happen and the heirs begin to turn up dead. Who is killing them and can the remaining heirs find out before its too late?