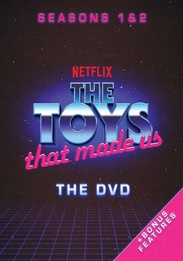 From the minds behind historys most iconic toy franchises discuss the rise and sometimes fall of their billion dollar creations. The documentary series taps into the emotional connection adults have with their toys from the past, while still attracting children of all ages.

Special limited run Blu-ray Special Edition with ON PACK TOY! The Toys That Made Us is an American television series created by Brian Volk-Weiss. The first four episodes of the series began streaming on Netflix on December 22, 2017, and the next four were released on May 25, 2018. This 8-episode documentary series, as it was originally touted, focuses on the history of important toy lines. The first four episodes focus on the Star Wars, He-Man and G.I. Joe toy lines with subsequent episodes featuring LEGO, Transformers, Hello Kitty, and Star Trek. This Special Edition included over 15 plus never before seen featurettes, deleted scenes, extended interviews and more!