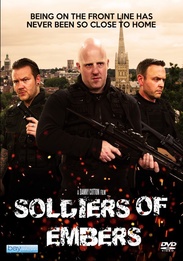 Ex-Paratrooper Jack Bishop is adjusting back to civilian family life while trying to reconnect with his teenage daughter. When Jack was away fighting, he felt guilty for not being around his little girl as she was growing up. Soldiers of Embers follows Jack into an exciting dramatic story of brotherhood and vengeance. Through the journey of the film we see how Jack goes from kind caring family man and changes into a dark, vengeful character due to the hell and tragedy that he is put through. By the end of the film we see how one decision that Jack made could have brought about a completely different outcome.