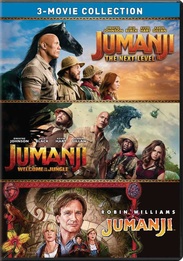 Jumanji
Robin Williams stars as Alan Parrish, who after 25 years, is finally freed from the spell of an ancient magical board game named Jumanji. The two children who freed him, however, have also unwittingly unleashed a group of wild exotic creatures from the game, forcing the long-lost Alan to save his hometown from destruction.

Jumanji: The Next Level
In Jumanji: The Next Level, the gang is back (Dwayne Johnson, Jack Black, Kevin Hart and Karen Gillan) but the game has changed. As they return to Jumanji to rescue one of their own, they discover that nothing is as they expect. With more action and surprises, the players will have to brave parts unknown and unexplored, from the arid deserts to the snowy mountains, in order to escape.

Jumanji: Welcome To The Jungle
Four teenagers in detention discover an old video game console with a game theyve never heard of. When they decide to play, they are immediately sucked into the jungle world of Jumanji in the bodies of their avatars (Dwayne Johnson, Jack Black, Kevin Hart and Karen Gillan). Theyll have to complete the adventure of their lives filled with fun, thrills and danger or be stuck in the game forever!

This is a multiple-item set containing these film/programs:

Jumanji
Jumanji: The Next Level
Jumanji: Welcome to the Jungle

Set is not rated. Films may be rated individually.