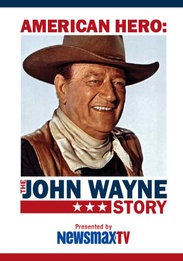 AMERICAN HERO: THE JOHN WAYNE STORY (DVD) explores the bigger-than-life star and hero to millions of Americans, not only as one of the most famous movie actors of his time, but one of the greatest Americans ever. "The Duke" was a hit with audiences across the globe and a box-office star for over four decades, most often playing the tough, and sometimes gruff cowboy - riding the range, chasing the bad guys, delighting the ladies, and shooting it out when necessary. Over four decades after his death, the memory of John Wayne endures through this emotional and provocative look into his personal and professional life. The storied and celebrated Hollywood figure comes to life in this in-depth portrait of the man who became a symbol of his country, a cultural icon, and classic American.