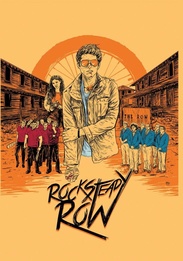 When a lone freshman arrives at Rock Steady University, he discovers that the campus is controlled by two rival frats: Kappa Brutus Omega and The High Society. His bike is stolen and shuffled into the illicit bicycle market, the fraternities' most valuable source of income. As the University descends into a Mad Max-style dystopian landscape, the freshman plays the rival fraternities against one another to reclaim his stolen bicycle.