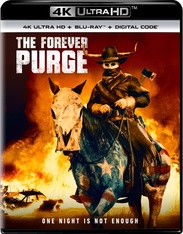 On the morning after The Purge, a masked gang of killers attacks the Tucker familyï¿½including Dylanï¿½s wife (Cassidy Freeman, HBOï¿½s The Righteous Gemstones), and his sister (Leven Rambin, The Hunger Games), forcing both families to band together and fight back as the country spirals into chaos and the United States begins to disintegrate around them.

Rated R for strong/bloody violence, and language throughout.