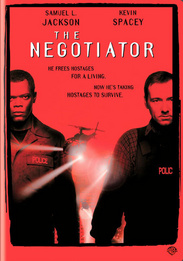 SWAT marksman stand ready as Danny Roman (Jackson) desperate to clear himself of false charges, holds the chief of the IAD and his staff at gunpoint. He asks that Chris Sabian (Spacey), a respected negotiator from another precinct, be brought in to negotiate. From there they match firepower and willpower in this action hit.