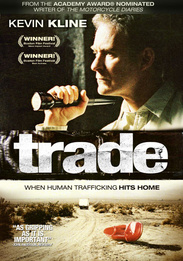 Adriana (Paulina Gaitan) is a 13-year-old girl from Mexico City whose kidnapping by sex traffickers sets in motion a desperate mission by her 17-year-old brother, Jorge (Cesar Ramos), to save her. Trapped and terrified by an underground network of international thugs who earn millions exploiting their human cargo, Adrianaï¿½s only friend and protector throughout her ordeal is Veronica (Alicja Bachleda), a young Polish woman tricked into the trade by the same criminal gang. As Jorge dodges immigration officers and incredible obstacles to track the girlsï¿½ abductors, he meets Ray (Kevin Kline), a Texas cop whose own family loss to sex trafficking leads him to become an ally in the boyï¿½s quest.