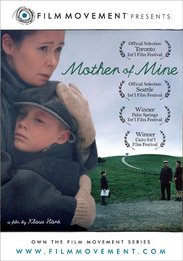 During World War II, more than 70,000 Finnish children were evacuated to neutral Sweden to avoid the conflict. Mother of Mine, the latest from the award-winning Klaus Haro ("Elina"), tackles that painful patch of history in a tale of 9-year-old Eero, a child who increasingly feels abandoned by his biological Finnish mother and yet not attached to his Swedish surrogate mom. When he is returned to Finland, his confusion intensifies.