Under the Same Moon 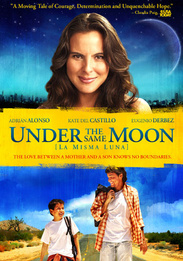 In her feature film debut, director Patricia Riggen weaves their parallel stories into a vividly textured tapestry of yearning and devotion that portrays a childâs courage and tenacity, and a motherâs sacrifice.

Nine-year-old Carlos aka Carlitos (Alonso) is one of the countless children left behind by parents who come to the U.S. seeking a way to provide for their families. His mother, Rosario (del Castillo) has worked illegally as a domestic in Los Angeles for four years, sending money home to her son and mother to give them a chance at a better life.

When the death of his grandmother leaves young Carlitos alone, he takes his fate into his own hands and heads north across the border to find his mother. As he journeys from his rural Mexican village to the L.A. barrio, Carlitos faces seemingly insurmountable obstacles with a steely determination and unfettered optimism that earn him the grudging respect and affection of a reluctant protector, a middle-aged migrant worker named Enrique (Derbez). The unlikely pair finds its way from Tucson to East L.A., but the only clue Carlitos has to his motherâs whereabouts is her description of the street corner from which she has called him each Sunday for the last four years. Unaware that Rosario is only hours away from returning to Mexico to be with her son, Carlitos and Enrique desperately comb the vast unfamiliar city for a place he has seen only in his imagination.