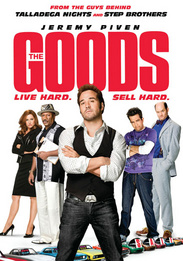 Don Ready (Piven) is a jack-of-all-trades who cares about one thing and one thing onlyâ¦selling cars. The ultimate hustler faces the greatest challenge of his legendary, and notorious, career when he attempts to save a local struggling car dealership from bankruptcy. In just one week Ready and his crew need to move over 200 cars and prove that when it comes to conning, conniving and all kinds of bad behavior, theyâve got the goods.