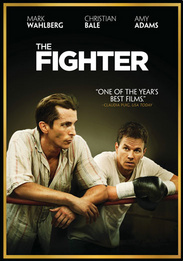 Academy Award Nominees Mark Wahlberg (The Departed), Christian Bale (The Dark Knight) and Amy Adams (Doubt) star in this remarkable film. Based on a true story, two brothers, against all the odds, come together to train for a historic title bout that has the power to reunite their fractured family and give their hard-luck town what it's been waiting for: pride. Micky Ward (Wahlberg) is a struggling boxer long overshadowed by his older brother and trainer, Dicky (Bale), a local legend battling his own demons. Their explosive relationship threatens to take them both down - but the bond of blood may be their only chance for redemption.

Rated R for language throughout, drug content, some violence and sexuality.