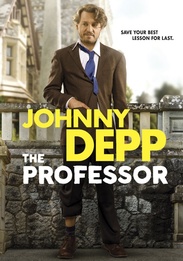 Johnny Depp delivers a wickedly funny performance as Richard, a buttoned-down college lecturer who, after learning he has six months to live, transforms into a rebellious party animal. To the shock of his wife (Rosemarie DeWitt) and school chancellor (Ron Livingston)and the delight of his studentsRichard leads a hilarious crusade against authority and hypocrisy in this dark comedy costarring Zoey Deutch.

Rated R for language, sexual content and some drug use.