Finding love at the movies and vice versa 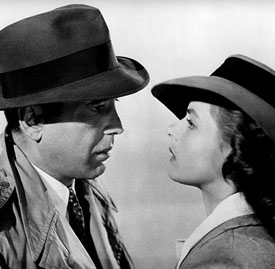 "Never marry someone who doesn't love the movies you love. Sooner or later, that person will not love you." - Roger Ebert

Today marks the two year anniversary of marital bliss to my loving and very patient wife Julie. As I was struggling to come up with the perfect gift to express the wonderful happiness that were the last two years of my life, I was having trouble.

I don't think I'm alone in this department, am I? It's not like the traditional list is any help. For year two, the traditional wedding anniversary gift is cotton. I suppose I could get her some cheezy t-shirt that says something trite like "Best Wife Eva."

But she's a stickler for proper grammar and spelling and she has taste, so that's out. Next year's gift is so easy. What wife wouldn't want a leather whip as an anniversary gift? Hmm, well, at least I still have a whole year to think on that one. And it doesn't help me one bit with this year's gift.

Cotton. A quick search on the Internet didn't help. I don't think Julie would appreciate bath towels as an anniversary gift, although I do have to give props to this site for suggesting a cotton candy maker. At least that's thinking outside of the box.

Hey, Hayden Panettiere is in that show Nashville. We live in Nashville (sort of). It's a sign. Well, it's more like the best idea I've come across so I'm going to run with it.

Since cotton is allegedly the fabric our lives and our lives were intertwined on June 10, 2011, I thought what better place to start than that date. So, just like those "Way Back When" books that tell you different (better) life was when you were born, here are a few things about June 10, 2011.

On our wedding date, Super 8 debuted in theaters. Of course, so did Judy Moody and the Not Bummer Summer, but let's focus on Super 8. The J.J. Abrams directed movie earned $35 million at the box office to earn first place for the weekend. And hey, J.J. Abrams is going to direct Star Wars: Episode VII, so that's definitely a good sign for our wedding date.

Well, I could give her a copy of Super 8 and wrap in a cotton towel, but I used the movies gift for Mother's Day, so I need some originality here. I wonder what music was burning up the charts that week.

As it turns out, Adele's "Rolling in the Deep" was on top of the charts that week. Julie loves Adele, but she already has this album, so that's not practical. But it sure is a catchy tune.

What about sports? I know that mid June is a dead period of sorts for sports, but maybe there's something that would hold our attention. The Canucks beat the Bruins in Game 5 of the Stanley Cup finals to move one game from the elusive Stanley Cup. Spoiler alert, the Bruins came back to win two straight and got to hoist Lord Stanley's Cup the following week.

We both love hockey, but neither one of us have a rooting interest in the Canucks or the Bruins. And besides, a 1-0 game is about as boring as it gets when it comes to hockey. Pass. Shoot. Score!

Let's face it, I'm not having much luck at finding a suitable gift. The fabric of our lives. Movies are sort of the fabric that runs through our lives. Heck, our daughter was conceived after a stop on the Red State tour, so perhaps the answer does in fact lie in film.

Let's backtrack a couple of years, like any couple in the infancy of their budding relationship, we played the "Have you seen" game when we started dating and we both came to some startling conclusions.

First, we were both huge Kevin Smith fans (phew, that one's a deal-breaker in my book) and that while we had very similar tastes in movies, music, books and popular culture as a whole, we had very specific holes in our consumption that the other demanded be rectified ASAP. For instance, Julie had never seen True Romance or Goodfellas and I had never watched Buffy the Vampire Slayer or much at all from Joss Whedon.

Three years, one toddler and one baby on the way later, somehow we have found time to catch up on a lot of each other's favorite passions. Julie watched those movies and the entire run of Lost while I watched both Buffy and Firefly amongst many others. What we found during these viewing sessions, besides the obvious amazing content themselves, was a deeper feeling of connection and love that is only possible when two people share a passion for something.

Whether that passion is sports, music or as the recently departed Roger Ebert proclaimed, movies, the sentiment is still the same. It's always more enjoyable and fun to share that passion.

With that in mind, I decided to take a look at our respective list of top ten favorite movies and see just how much long-term compatibility we have as a couple. I'm hoping the outlook is rosy because I'm sort of fond of Julie and I'd hate to learn that Pootie Tang sneaked into her top ten list.

I mean some things are just unforgivable, no?

Funny side note here, I was pulling the trailer above and just realized for the first time that Louis C.K. wrote and directed Pootie Tang. Because I was curious, I decided to do a bit more research on the film and apparently Paramount Pictures took the film away from Louis C.K. and brought in their own editor to destroy his vision.

It sort of makes me want to see his vision of the film and I wonder if Paramount has the cajones to ever release a director's cut of the film. There's a great interview with Louis C.K. and Jim Norton that talks about the process of how the film was handled.

Back on topic. My top ten list is a matter of public record that you can check out any time by clicking on my name in any story that I write. But for those of you too lazy to hit a link, here's a refresher:

Casablanca
Citizen Kane
Clerks
The Empire Strikes Back
The Godfather Part II
It Happened One Night
Leon: The Professional
The Prestige
The Shawshank Redemption
True Romance

You'll notice that the above list is in alphabetical order. It was torturous enough just to come up with the list, having to rank them would be impossible. So, I asked Julie to also come up with her top ten list of films and this is what I received:

Again, I sorted her list alphabetically, so as not to force her to do something that I'm incapable of doing myself. What is interesting is that despite having two wildly different lists (only two films overlap: Casablanca and The Shawshank Redemption), the lists are more similar than one would gather at first glance.

In True Romance and Kill Bill, we have both listed films written by Quentin Tarantino. They both speak to our affection of violent films, yet refined with great dialog punctuated by a plethora of pop culture references.

Natalie Portman is represented in both lists with Garden State and Leon: The Professional. While she's the only one with a Coen brothers movie on her list, I'm willing to be two or three of their films are in my next ten. Likewise, Julie doesn't have a Kevin Smith film on her list, but I know that she's a pretty big fan of his work.

Of course, there are some interesting disparities as well. Julie tends to like visually stunning fare such as Across the Universe, Big Fish and Pan's Labyrinth, while I tend to focus more on gritty character driven films (Citizen Kane, The Godfather Part II and Leon: The Professional).

With the exception of Casablanca, all of Julie's films have been released within her lifetime. Four of the films in my list predate my birth.

So, what does this all mean for our long-term prospects as a couple? Do we pass the Roger Ebert test?

I'm not sure there is a right and wrong answer when it comes to similar tastes in movies and being happy in a marriage, but it doesn't hurt. Julie and I have remarkably very similar tastes in films and more importantly, similar feelings on which movies to avoid. I think that's the more telling sign of long-term happiness.

Whether you both like the same films or not, there's only so much Adam Sandler you can tolerate. Two years in, we both know when it's time to change the channel and that's a very good thing.