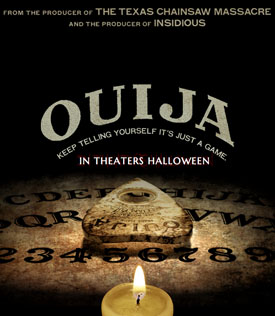 The only downfall in having two young children is that my ability to watch horror films is greatly diminished. This is unfortunate because I cut my teeth of film appreciation by watching a ridiculous amount of '80s horror flicks. So, I have a soft spot in my heart for a good scary movie that has been neglected these last few years.

Case in point, I never had a chance to see The Conjuring, but I heard great things about it. So, I suppose that I shouldn't be surprised that the prequel coming out this Fall has also been getting good word of mouth.

James Wan is one of the hottest directors around and while he wasn't directly involved with Annabelle, you can tell that the apple didn't fall too far from the tree. It also helps that Annabelle ranks through the roof in the "creepy doll category." I don't know what it is about creepy dolls, but they give me an extra case of the willys.

Annabelle will bleed in theaters on October 3.

I almost forgot completely that Ouija was coming out this year. It's been gestating so long that it just simply slipped from my mind. Back when everyone had high hopes for Battleship, Universal was buying up toy properties left and right. This was the one game that I thought had a decent chance for success given how loosely you could tie the game to any decent horror film.

In fact, after watching the trailer, I'm convinced that they simply just repurposed the latest Final Destination sequel and threw in a Ouija board. Either way, there is one great reason to see this film and that's budding star Olivia Cooke. The young Brit actress has been making a name for herself in the TV series Bates Motel, but this will be her first chance to carry a film.

Ouija hits theaters in time for Halloween on October 24.