Cooter's Watch List: No really, this movie is 'Dope' 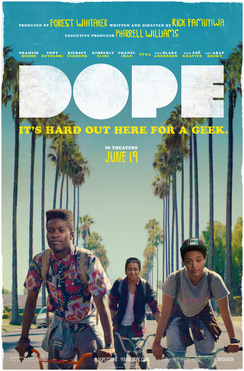 Now that the site seems to be getting back into the swing of things, we can finally concentrate on the things that matter. You know movies.

There are not as many sleepers out this week compared to last week, but there's some great quality here. As with all of the Cooter Watch Lists, there's a little something for everyone.

If you like those Sharknado films, then you'll definitely want to keep reading. If you enjoyed my pick of Me and Earl and the Dying Girl a couple of weeks ago, then you'll want to check out the titles below.

In other words, there's always a bit something for everyone each week and this list is just the tip of the iceberg. These are the films that look good to me, mostly on appearances only, but I can't know exactly what you'll like, so you'll want to make sure and check out weekly list and see which ones I missed.

Bobcat Goldthwait is one bizarre dude and while his acting work is a bit esoteric, his directing efforts have been a bit more straight forward. Here, it's a documentary look at a comic with a dark past who found a new life as an advocate for those abused children exploited for child pornography.

This Australian film was the Audience Award winner at SXSW this year and one look at the trailer will make you understand why. The film is brash and frank, unlike most traditional Hollywood films. And yet, the themes are those that will resonate with many 30 something couples who have ever had trouble discussing sexuality with their partners.

In the vein of Sharknado, this is the latest in an ever-growing list of absurd horror films. While they aren't usually my cup of tea, I can see the attraction and this one looks about as outrageous as the rest of them. I'm hoping there's something more to it than simply "killer sand," but I'm doubtful.

The popular Cartoon Network series has its first full-length movie! Chock-full of silly "bro humor" and sci-fi action, it's fun to hang with Mordecai and Rigby for a while.