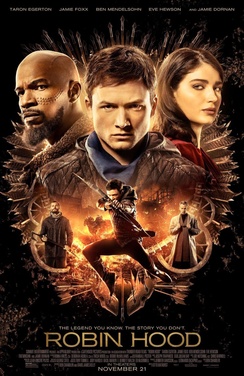 I really wanted to love this film. I mean, Taron Egerton has been on my radar since his brilliant turn in Kingsman: The Secret Service and Jamie Foxx is always fun, so what could go wrong?

As it turns out, pretty much everything.

Maybe it's not the film's fault, but merely my high expectations that were crushed under the weight of a film that simply didn't deliver on a promising new angle to the timeless tale. Or, maybe, they just didn't spend enough on developing the script. Either way, the film was an ambitious reimagining of the Robin Hood story that simply didn't work.

In this twist, Robin of Loxley is returning home from the Crusades and recruited by a Moor stowaway (Jamie Foxx as Little John) to help him on his quest for retribution. Robin agrees in exchange for training from Little John and hopes that his new direction will help him win back the heart of Maid Marian. That doesn't sound so bad, right? Well...

While the first mentions of Robin Hood put him squarely in the time period of the Crusades, their inclusion in his story has only found its way to the lore more recently. No, the traditional story sets the story in picturesque, lush forests in England where the good motives of the would-be criminal more than makes up for his redistribution of wealth crimes.

And yet, the Crusades are ripe to be exploited as the backdrop of Robin Hood. It allows the filmmakers to present a darker take on the tale with the potential for stylistic additions that would allow the period film to compete with modern blockbusters in terms of special effects. As I said, Robin Hood was an ambitious undertaking and if it had worked, the film had the potential to be a unique take on the story without sacrificing the story's prime elements.

The problem is the screenwriters simply couldn't strike the right tone for either Robin or Little John. Taron Egerton's performance comes off as smug and smarmy and it becomes really hard for the audience to cheer for him. As for Jamie Foxx, his vengeance storyline is intriguing for the first act but it's quickly pushed to the back burner for the insipid love story between Robin and Maid Marian.

The lack of chemistry between Egerton and Marian's Eve Hewson is troubling, especially since it is the driving force for the entire second half of the film. This is really frustrating because the elements are there for a compelling stylistic critique of modern greed and the oppressive nature of the ruling class, but instead, we get a watered-down version of I Love Lucy.

From the initial trailer, I thought Robin Hood might be everything that I wanted Assassin's Creed to be. I was let down by the video game adaptation in that I didn't think they completely realized the aesthetic of the series, instead focusing on the plot that really should have served as a launching point and not a convoluted mess. While Robin Hood suffered from many of the same issues as the other movie, it never fully grasped the visual palette that it was aiming for. In the end, the fight scenes were almost too stylistic and over-choreographed to a point that it didn't feel real.

I was fortunate to review the 4K UHD version of the film and I can say that the Dolby Vision HDR presentation was beautiful. The film really basks in the dark and the added richness of the blacks allowed the film to truly present an amazing looking print. The actions sequences were fluid and detailed which showcased the filmmakers' talents, but they simply went too far too often.

The Dolby Atmos audio track is a real headliner too as the film does feature a lot of loud action throughout and the difference between the Blu-ray is very noticeable in several scenes. Overall, the experience is just much more robust and lush on the 4K UHD version of the film.

I will say that despite the film not living up to my high standards, I was completely blown away by the breadth and depth of the special features. When films underperform at the box office, studios tend to rush it out on home entertainment in a barebones package, but that is not the case here. There's a seven-part documentary that details the process of reshaping the story for a modern cinematic audience. As I said, from this feature, you start to get an idea of what they were aiming for, but it's just sad to see that the end result was so far from their intended product.

Overall, the action scenes are a bit chaotic and too stylized for my liking, but I appreciate their ambitious aims to give the classic tale a different look and feel. Unfortunately, the film doesn't deliver the goods and while the film was far from terrible, it still doesn't really do much to either give us a new classic Robin Hood movie or an satisfying period piece.